©2008 Richard Murray
Posted by Rick at 12:26 PM 24 comments:
Email ThisBlogThis!Share to TwitterShare to FacebookShare to Pinterest 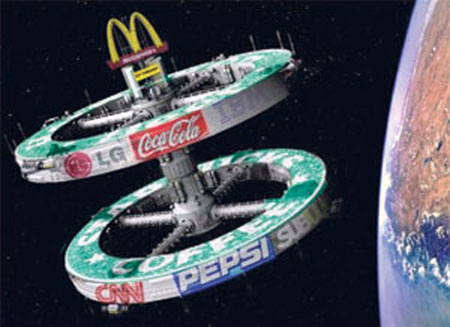 Posted by Rick at 8:51 AM No comments:
Email ThisBlogThis!Share to TwitterShare to FacebookShare to Pinterest 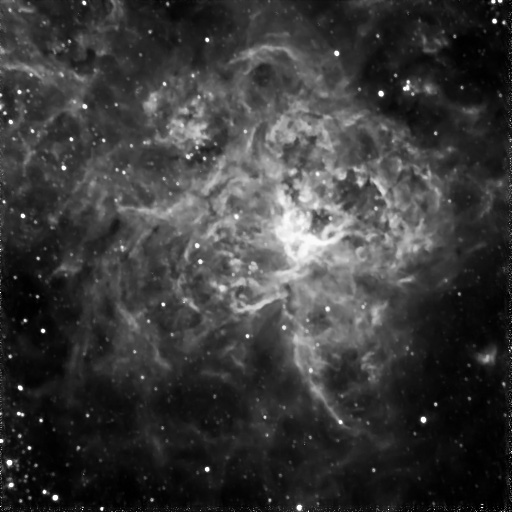 
Notes: The Tarantula is a giant emission nebula within our neighboring galaxy the Large Magellanic Cloud. It is so bright that if it were the same distance as the Orion Nebula it would cast shadows!

The image above is a stack of five 10 minute H-Alpha filtered exposures.

I also took red, green and blue exposures which I will process later.

I can't give you all of the particulars of how I processed this image because my methods vary with each one but I certainly can give you an overview so here it goes:

The luminance images were loaded into CCDStack and calibrated with darks, flats and bias applied. Then an std sigma reject was applied to all images and the rejected pixels were imputed. Then a positive constraint deconvolution was applied with 100 iterations. The images were then registered, normalized and stacked using a sum combine. A DDP adjustment was then applied on the summed image with auto scale and adjustments were made to background, maximum and gamma settings. The image was then saved as a 16 bit .tif file. All of the same functions were applied to the red and blue frames with the exception of deconvolution and the fact that a maximum combine instead of a sum was used for stacking.

On the luminance image, I used space noise reduction from Noel Carboni's Astronomy Tools and star trail elimination from Peter's Actions for Astrophotographers.

I applied a median filter to process out some black artifacts that resulted from a poor dark subtraction.

I switched to lab color and deselected all but the lightness channel and saved the image (this brings about an overall brightening of the image).

I applied a coarse high pass sharpening to the galaxy core and rim.

There was some grainyness to the image background so I did a gaussian blur subtraction using Apply Image with blending set to subtract and an offset of 25.

LRsGB processing was done by following a combination of Steve Cannistra's 'Modified Bicolor Technique' and R. Scott Ireland's LRGB procedures from his book 'Photoshop Astronomy'. A synthetic green channel was created prior to color processing. A couple of action steps applied to the color image were soft color gradient removal and increase star color.

There were many other steps applied in Photoshop in the .tif and .jpg formats too numerous to mention (or remember for that matter).

A dynamic background extraction was applied and prior to image sharpening an SGBNR smoothing routine was applied.
________

Here is the absolutely final widefield full resolution image (honest) of M104. There were two minor corrections done in Photoshop. First, three large stars in the image were damaged because they weren't protected during processing, so I replaced them with the stars as they were before processing. Second, the top star halo of M104 was too blotchy and unnatural so I lassoed the area and went to the filter menu and selected Pixelate and applied the fragment function to the area which took care of most of the blotchies.

Be sure to click on the image for the full widefield view:

Posted by Rick at 1:03 PM No comments:
Email ThisBlogThis!Share to TwitterShare to FacebookShare to Pinterest 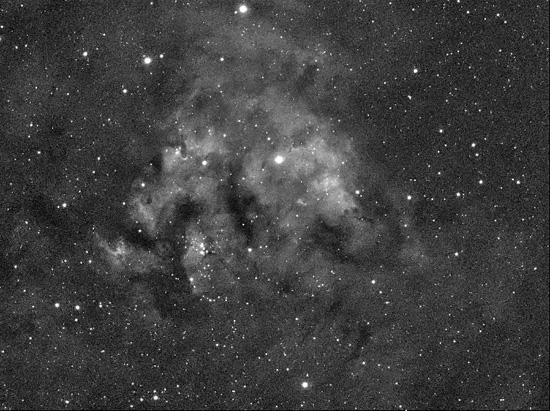 
Notes: This large emmision nebula in the constellation Cepheus (also known as the Calf Nebula) will be my next narrowband imaging target. I'll start the project as soon as the moon goes away around mid September. This one will be a minimum of 18 hours imaging with 6 hours for each narrowband filter (Ha, OIII, SII).

I think this one holds a lot of promise with a large amount of nebulosity and structure.

The image above is a single shot 240 second Ha exposure. 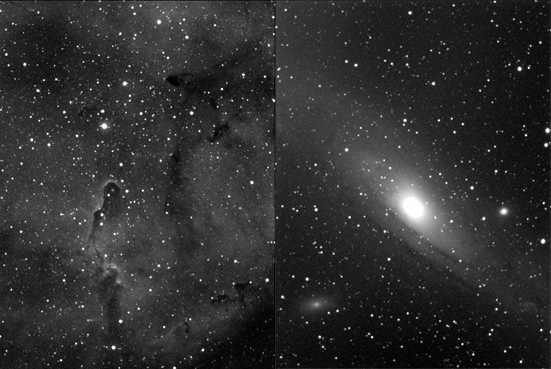 
Notes: Here's a couple of unprocessed test images I took last night with my new 66mm Doublet APO. I was having trouble achieving focus until I put a 20mm extender in the optical chain which finally did the job.

What I like about these images is the wider field of view, but most important the stars are nice and round right to the edges of the image. So there's no dreaded vignetting going on. Also because of the short focal length (about F4.7 with the 0.8focal reducer) the ccd exposure times can be shorter. The left image was taken with an Ha filter for 4 minutes and the right image with a red filter for 3 minutes.

US vs THEM (It's a geek thing) 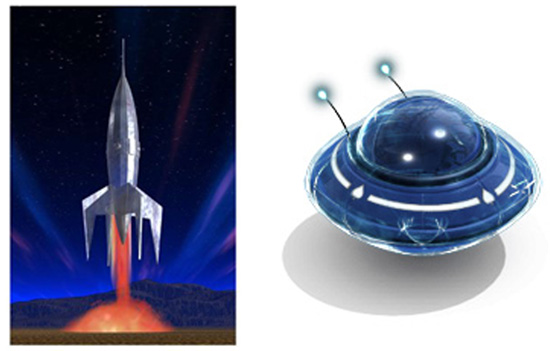 Posted by Rick at 2:12 PM No comments:
Email ThisBlogThis!Share to TwitterShare to FacebookShare to Pinterest

Earth Beside a Terraformed Mars 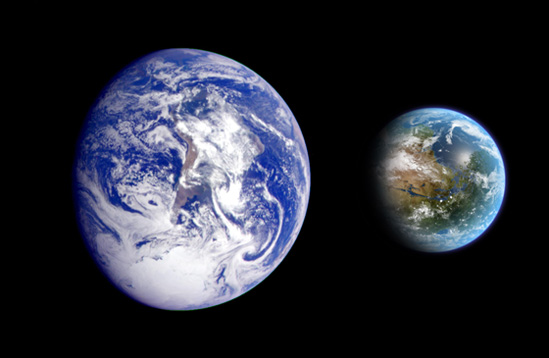 Posted by Rick at 3:47 PM 4 comments:
Email ThisBlogThis!Share to TwitterShare to FacebookShare to Pinterest 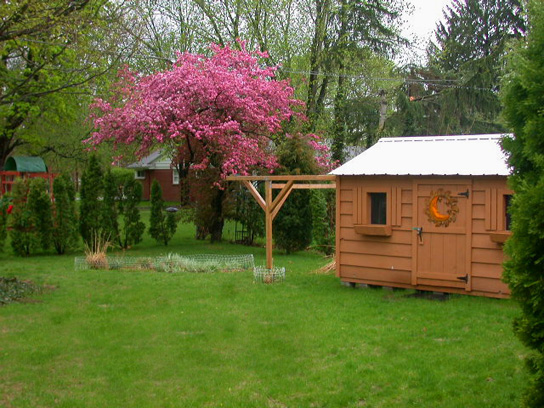 For the past six months, I've been taking a hiatus from imaging. I'll eventually get back into astronomy but I'm trying to decide if I should continue with imaging and image processing or maybe focus on a more 'scientific' area of amatuer astronomy. A couple of areas I've been considering are supernova or comet hunting and possilby exoplanet hunting. All of these endeavors are possible even with the modest equipment I have available.

A great article on amatuer supernova hunting 'Searching for Supernovae on a Shoestring' appeared in the July 2009 issue of Sky & Telescope. I have the same ccd imager that the author uses.

So I'll continue to ponder for awhile what part of the universe I want to explore. Until then keep looking up.

Rick Murray
Posted by Rick at 1:36 PM 2 comments:
Email ThisBlogThis!Share to TwitterShare to FacebookShare to Pinterest

Below are stereo pairs of my recent Soul Nebula image.

The first image is the parallel version. Just stare at the middle of the two images and another image should appear in 3D.

The second image is the cross version. Just stare at the center of the image while crossing your eyes and another image should appear in 3D. 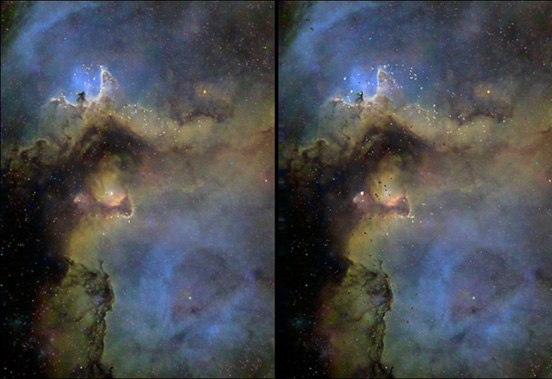 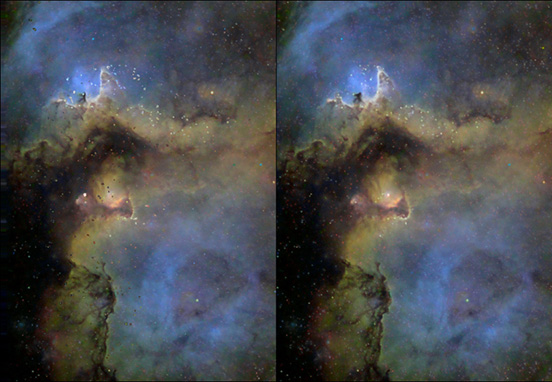 These were created using J-P Metsavainio's Stero Pair Action for Photoshop which can be found here: Stero Pair Action
Posted by Rick at 4:27 PM 5 comments:
Email ThisBlogThis!Share to TwitterShare to FacebookShare to Pinterest 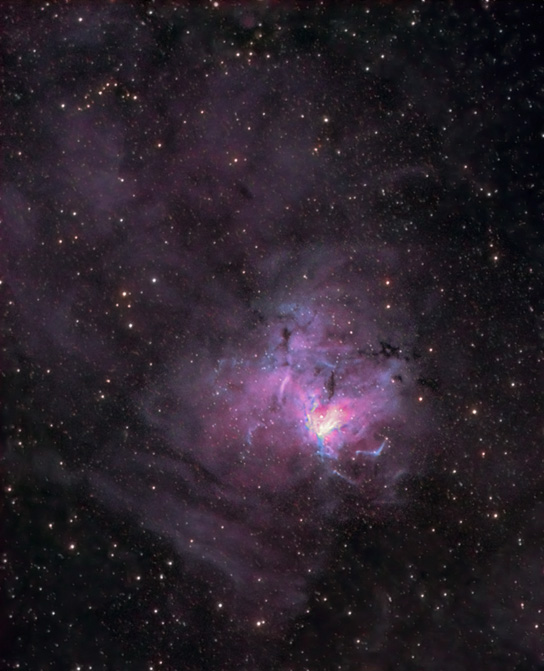 
Notes: This is an emission nebula in the constellation Perseus. The nebulas glow is caused by hot gas plasma that is excited by embedded energetic young stars including the central star, BD+50 886 (mag 11.2) which is responsible for the brightest area with it's own blister nebula and glowing columns of gas.

The color palette used for this image was: OIII Red, SII Green, Ha Blue. This gives the image some unusual colors but helps to show how dynamic and active this region really is.

Imaging with narrowband is sometimes like looking at an object from an aliens perspecive whose eyes don't perceive colors the way we do but whose vision may in some ways be superior to our own.

Read More
Posted by Rick at 5:49 PM 2 comments:
Email ThisBlogThis!Share to TwitterShare to FacebookShare to Pinterest

An Angel in the Soul 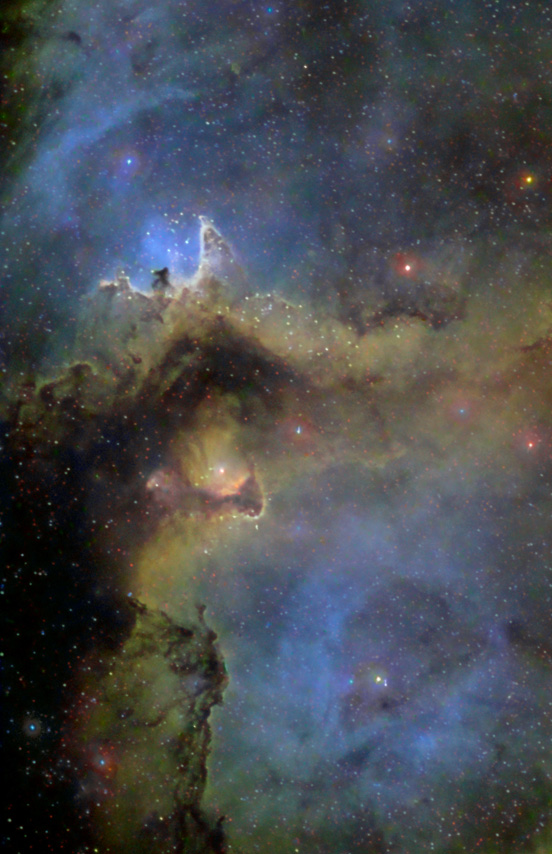 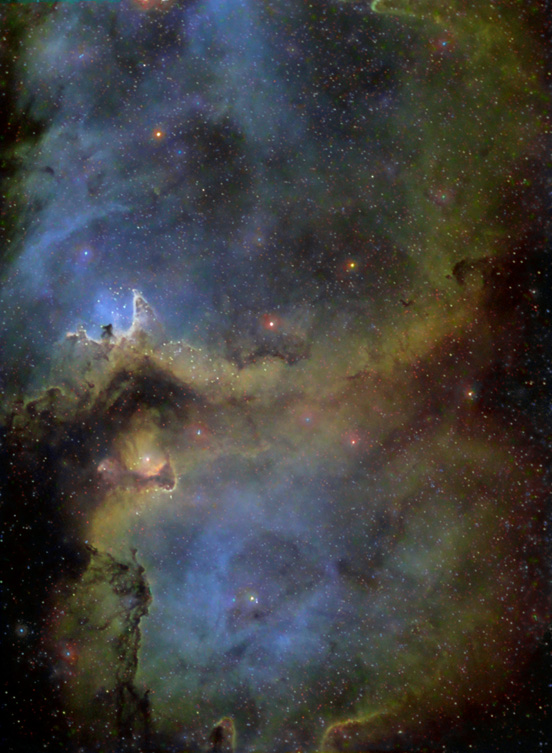 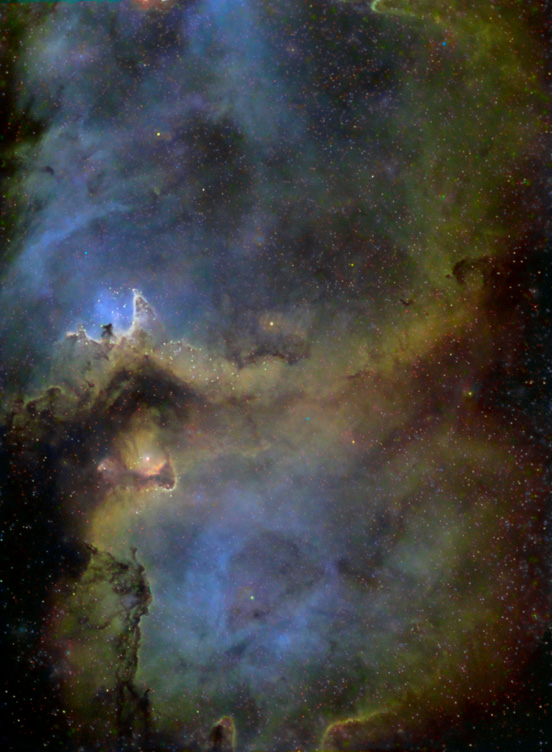 Notes: This is my second narrowband project which is the Soul Nebula right next door to the Heart Nebula. The weather wasn't as cooperative this time but I did manage to get most of the image exposures I needed. I got a full six hours of Ha but only managed half that for the OIII and SII filters. Still, it turned out pretty well.

Be sure to click on the image for a full size view and also at the bottom, the Read More link will take you to a great article in Universe today about this colorful nebula.

Read More
Posted by Rick at 2:57 PM 2 comments:
Email ThisBlogThis!Share to TwitterShare to FacebookShare to Pinterest 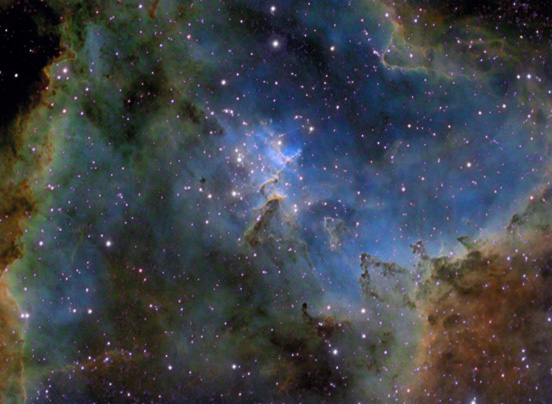 Zoomed in to image center. 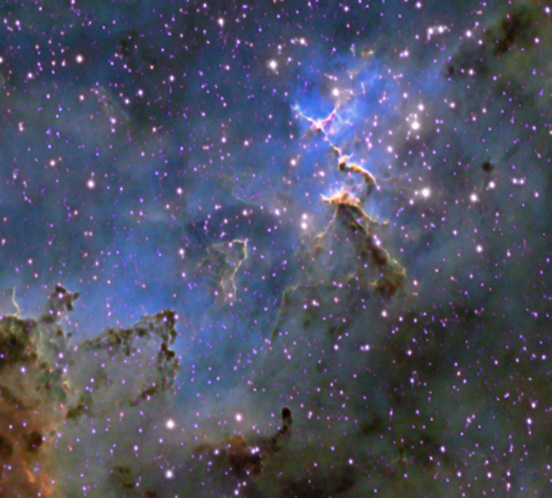 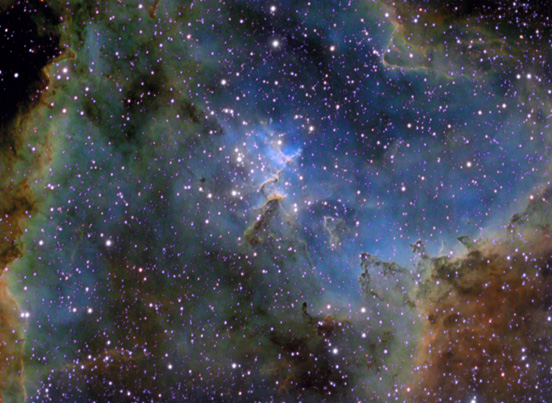 
Notes: This was an imaging run that took three nights to complete with 6 hours per filter and 30 minute subs for a total of 18 hours imaging. I've never imaged that long on one object before but I think the effort was worth it. I used the Hubble Palatte with SII as Red, Ha as Green and OIII as blue.

Be sure to click on the image for a full size view.

Read More
Posted by Rick at 12:28 AM 4 comments:
Email ThisBlogThis!Share to TwitterShare to FacebookShare to Pinterest 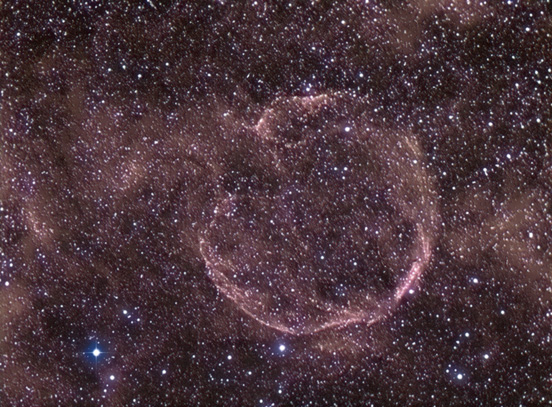 
Notes: This is a supernova remnant sometimes referred to as Abell 85 located near the star Caph in the constellation Cassiopeia.

This reminds me of Simeis 147 I made an attempt at imaging a while back which is also an extremely faint remnant: here

I decided to image this using narrowband (Ha mapped to red, OIII to green, and SII to blue) filters to try to get as much detail as possible during the short amount of time I had.

CTB-1 is rarely imaged by amatuer astronomers and currently I could find only two examples on the internet. The second link refers to Dean Rowe's image which he took just recently in HaRGB and was my inspiration to give this challenging object a try:

Image of Bottom Half of CTB-1

To me this object looks like a cell wall which has just burst open with its contents flowing out towards the upper left.

Be sure to click on the image for a full size view.